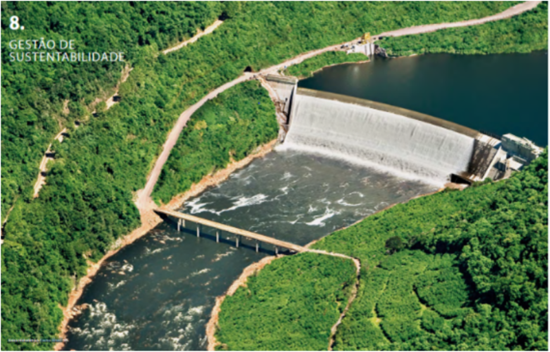 This project consists of a hydropower plant with a total installed capacity of 130 MW, located in the cities of Bento Gonçalves, Nova Roma do Sul and Veranópolis, state of Rio Grande do Sul, Southern region of Brazil. The first Kaplan turbine started its operation on 29 December 2004 and the second one on 29 November 2006.

The project contributes to sustainable development since it meets the present needs without compromising the ability of future generations to meet their own needs, as defined by the Brundtland Commission (1987). The implementation of hydroelectric power plants ensures renewable energy generation, reduces the national electric system demand, avoids negative social and environmental impact caused by the construction of large hydropower plants with large reservoirs and fossil fuel thermos-power plants, and drives regional economies, increasing quality of life in local communities. The project is reducing negative environmental impacts and has strengthened the regional economy, resulting in better quality of life. In other words, environmental sustainability combined with social and economic justice, undeniably contribute to the host country’s sustainable development.

The project activity reduces emissions of greenhouse gas (GHG) by avoiding electricity generation from fossil fuel sources (and CO2 emissions), which would be generated (and emitted) in the absence of the project. Then, the baseline scenario is identified as the continuation of the current (previous) situation of electricity supplied by large hydropower and thermal power stations.

For more information on the social benefits of this project, you can find here.

For more details on this project, please click here.